k is a positive integer and is less than or equal to the length of the linked list. If the number of nodes is not a multiple of k then left-out nodes, in the end, should remain as it is.

You may not alter the values in the list’s nodes, only nodes themselves may be changed.

Follow-up: Can you solve the problem in O(1) extra memory space?

The problem statement clearly mentions that we are not to use any additional space for our solution. So naturally, a recursive solution is not acceptable here because of the space utilized by the recursion stack. However, for the sake of completeness, we shall go over the recursive approach first before moving on to the iterative approach. The interviewer may not specify the space constraint initially and so, a recursive solution would be a quick first approach followed by the iterative version.

Now that we have the basic linked list reversal stuff out of the way, we can move on with our actual problem which is to reverse the linked list, k nodes at a time. The basic idea is to make use of our reversal function for a linked list. Usually, we start with the head of the list and keep running the reversal algorithm all the way to the end. However, in this case, we will only process k nodes.

However, the problem statement also mentions that if there are < k nodes left in the linked list, then we don’t have to reverse them. This implies that we first need to count k nodes before we get on with our reversal. If at any point, we find that we don’t have k nodes, then we don’t reverse that portion of the linked list. Right off the bat, this implies at least two traversals of the list overall. One for counting, and the next, for reversals.

The recursive approach is a natural fit for this problem since the problem asks us to perform a modification operation on a fixed portion of the linked list, one portion at a time. Since a sub-list of a linked list is a linked list in itself, we can make use of recursion to do the heavy lifting for us. All we need to focus here is how we are going to reverse those k nodes. This part is sorted because we already discussed how general linked list reversal works.

We also need to make sure we are hooking up the right connections as recursion backtracks. For e.g. say we are given a linked list 1,2,3,4,5 and we are to reverse two nodes at a time. In the recursive approach, we will first reverse the first two nodes thus getting 2,1. When recursion backtracks, we assume that we will have 4,3,5. Now, we need to ensure that we hookup 1->4 correctly so that the overall list is what we expect.

Let’s look at a quick example of the algorithm’s dry run. So, in the first recursive step, we process the first two nodes of the list and then make a recursive call. 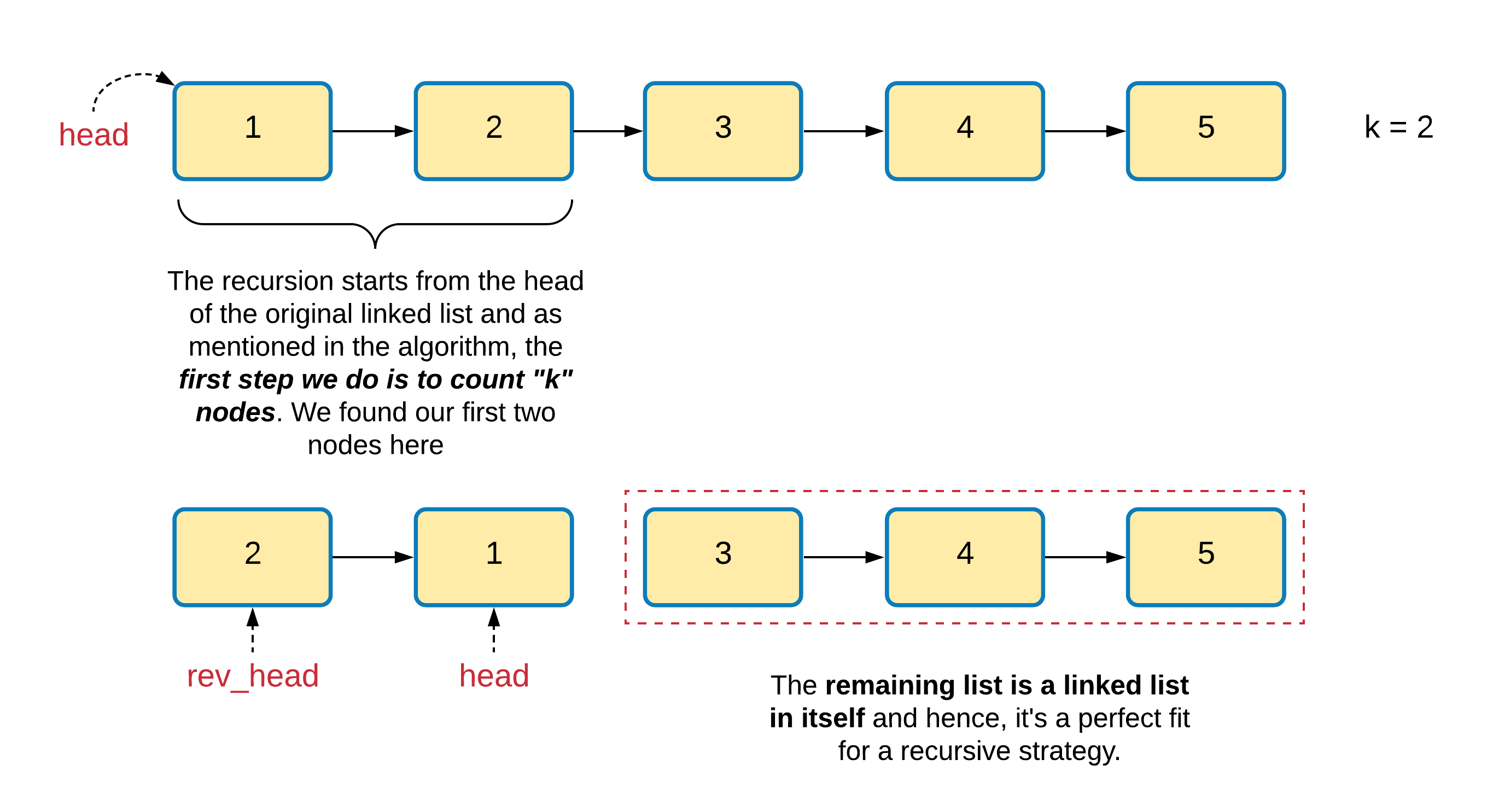 Here again, we process the two nodes and then make the final recursive call for this example linked list. 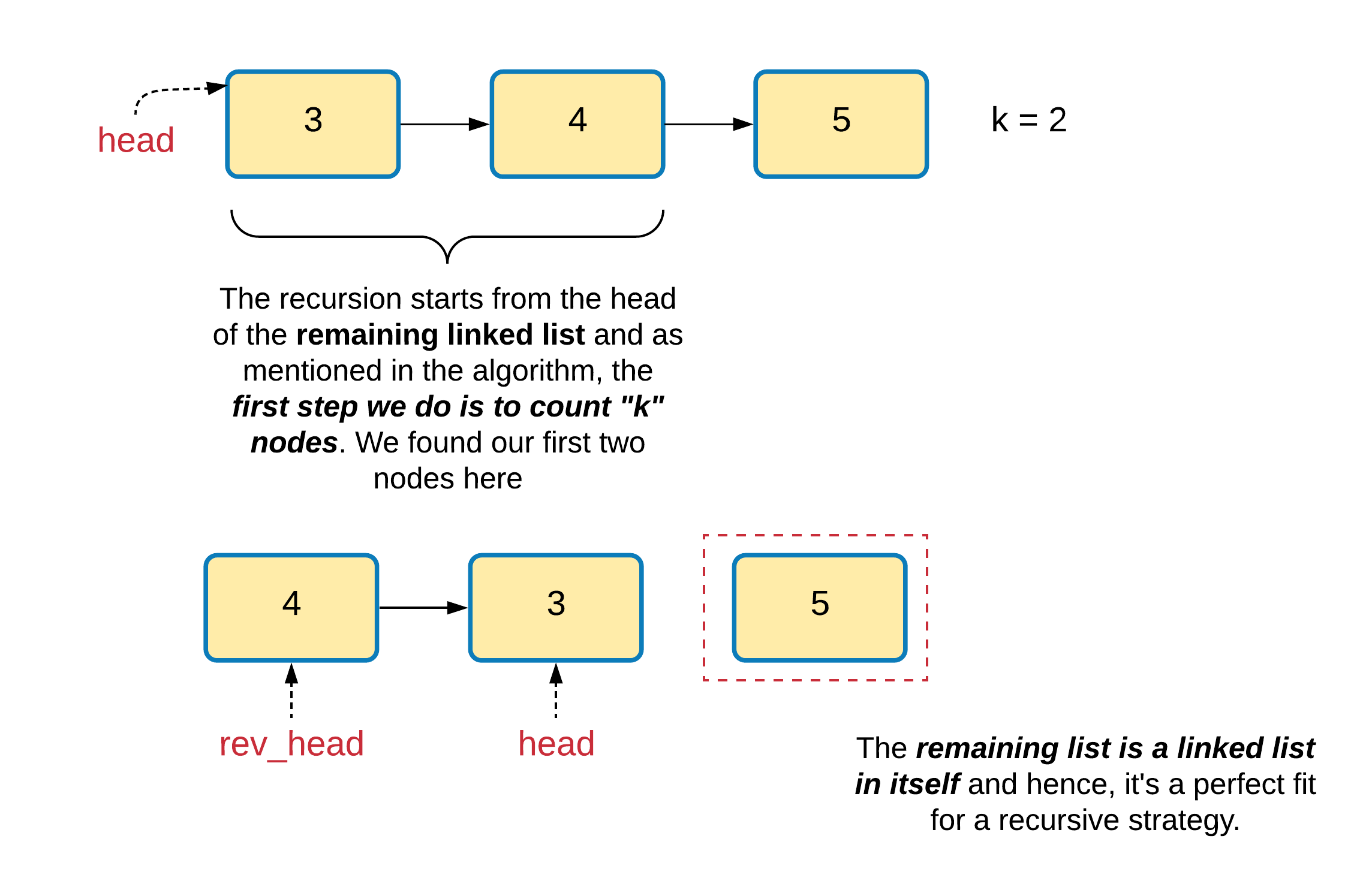 Now here we don’t have enough nodes to reverse. So, in the recursive call we simply return the only remaining node here which is “5”. Once that node is returned from the recursive call, we need to establish the proper connections i.e. from 3->5. 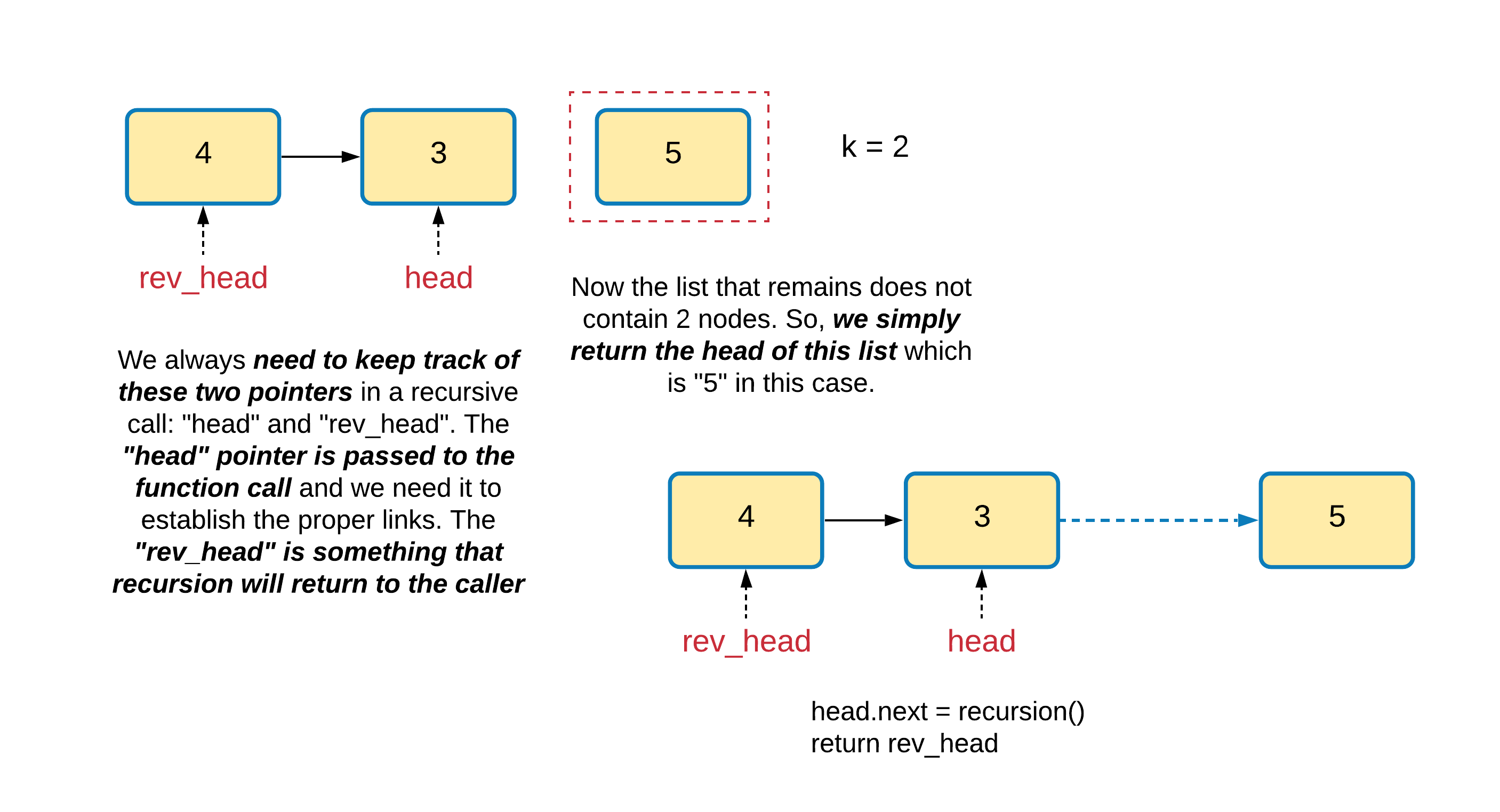 [LeetCode 1010] Pairs of Songs With Total Durations Divisible by 60